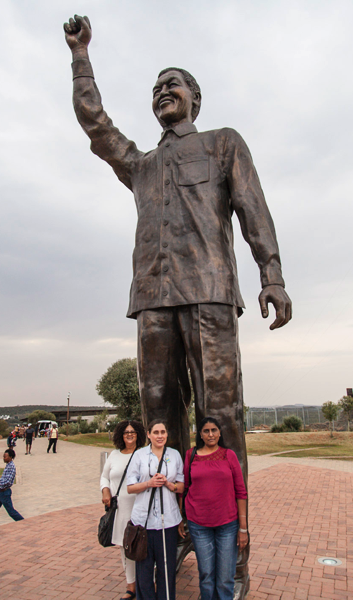 I believe one of the characteristics of a great leader is the ability to make people feel seen, heard and acknowledged. This was a skill that the late Nelson Mandela demonstrated regularly, as can be seen from the numerous stories of the way he engaged with people from all walks of life.

Tomorrow marks the centenary of the birth of the great Madiba and I’d like to mark the occasion by sharing the stories of the times I was privileged to meet the great man himself.

My first chance encounter with Mr. Mandela took place in the Student Union at the University of KwaZulu-Natal shortly before I lost my sight. At the time I was still able to walk around without a mobility aid, as long as I was careful where I put my feet – I could still see everything but everything was blurred, as if I was looking at the world through a thick pane of frosted glass. As I navigated my way down a short flight of stairs I realized that I had very nearly placed my boot-clad foot down on someone’s shoe.

I looked up with an apology poised on my lips – and found myself staring into the face of the great man himself. Those of you who know me well will know that I’m seldom speechless but the words of the glib apology I’d been about to utter simply vanished from my mind.

Mr. Mandela smiled and softly murmured “Bless you, my child,” and then entered the hall where throngs of students had gathered to hear him speak. ,

Two years later Mr. Mandela capped me when I graduated. By then I was totally blind and needed sighted assistance as I crossed the vast stage, was capped by Madiba and then moved to collect my degree to thunderous applause. Though I wasn’t aware of it at the time, friends told me later that there had been two standing ovations at that graduation ceremony – one when we were addressed by Madiba and one when I was capped. And yes, I did manage to avoid standing on his toes that time!

What I remember best about those two chance meetings was the sense of calm and serenity that surrounded Madiba, and the way he made me feel like I had his complete attention with just the power of his presence, his focus, and a few simple yet genuine words. On both occasions I was merely one person amongst hundreds of others, yet he made me feel seen and acknowledged – a lesson that each of us in a position of leadership can learn and strive to emulate.

I still find it amazing what a strong impression those two brief encounters had on me – a lesson in the power of true and genuine leadership and the importance of truly being able to see, hear and acknowledge the people with whom we come into contact, no matter in how trivial a way.

Next time I’ll start sharing some experiences from my recent travels to Germany and Poland – it’s been a month since I returned so it’s high time I let you into some of my adventures!