No Wonder She Left! 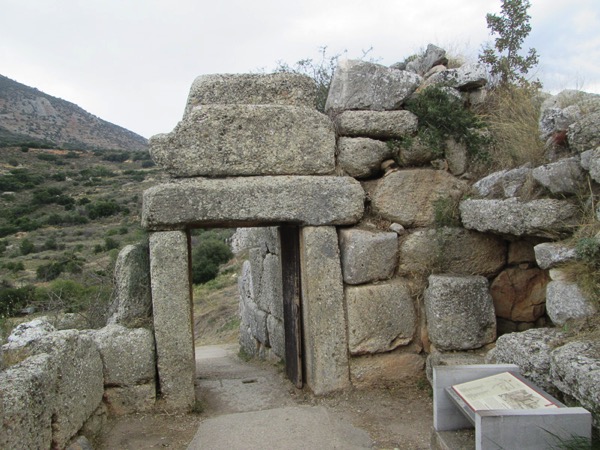 It was a chilly, rainy, windy day that we found ourselves visiting the Citadel of Mycene on our recent trip to Greece. As chance would have it, of course that was the day I chose to wear a sleeveless sundress and sandals!

Those of you who know the story of Helen of Troy will be aware of why Mycene was one of those “have to see” places for me as someone who studied Classical Civilisations. For those of you not familiar with the story, Helen started off being married to Menelaus, brother to the king of Mycene before Paris came along and the two of them landed up in Troy, which was what started the Trojan War. Or so we’re told by Homer in The Iliad.

Anyhow, the visit to the Mycenean Citadel was profound for me, imagining Myceneans of the 8th Century BCE walking beneath the imposing Lion Gate, climbing the steep paths from one building in the Citadel to another, or staring from the crest of the hill upon which the Citadel stands surveying the surrounding landscape… which was probably covered by olive trees even then!

I’m sure If I’d been more warmly dressed I would have found the weather wonderfully atmospheric as I stood there recalling the story of the great battle that took place between the Greek forces under the leadership of Agamemnon, Menelaus and the wily Odysseus and the Trojans whose ruling family included such well-known names as King Priam, Hector, and Cassandra, fated to tell only the truth but never to be believed. I probably would have relished the wild weather and allowed it to fuel my imagination as I tried to conjure visions of what life might have been like for all those living and working in the Citadel almost 3000 years ago.

Sadly, shivering in my sundress and sandals, all I could do was to conclude that, if this was an indication of the usual weather experienced in Mycene, then it was no wonder Helen decided to accompany Paris to Troy!