I wish I had time to describe the entire Blind Date Concert I took part in at the National Arts festival in Makhanda in June this year – the rich diversity of personalities, music, poetry and performances; the energy and wit of our dynamic MC, Fiks Mahola; the professionalism of our stage crew who managed our sound, lighting and props so efficiently; and, of course, our wonderfully responsive audiences.

I’d love to be able to share the entire experience with you so you could understand what a special show this was. But sadly, all I can do at this stage is to share a video of my own performance.

This was recorded on the second night of the show and includes an introduction by award-winning blind poet Lelethu “Poetic Soul” Mahambehlala, who graced each of us with a poem based on our own stories. Lelethu was dynamite, as I’m sure you’ll see when you watch the clip.

On that note, it’s showtime, folks! So, get ready for your cue… 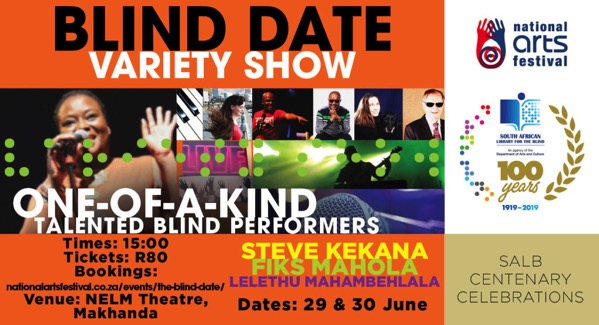 Makhanda – The Evelyn Guest House and a Note from Fiji 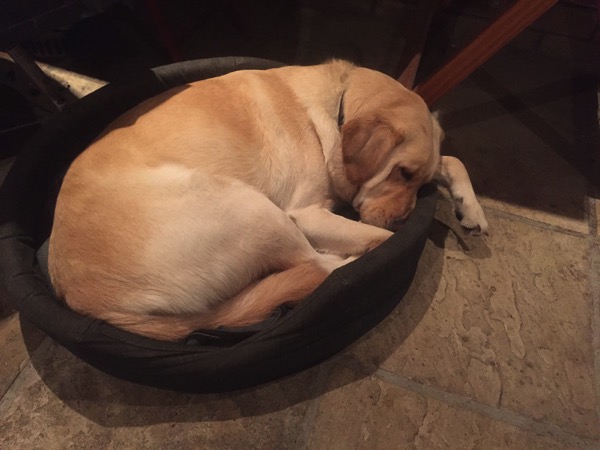 It’s no small undertaking to arrange a show with 13 performers when 9 of them are visually impaired and 1 of them is a dog. Yet, that’s what the South African Library for the Blind and the truly awesome project coordinator, Catherine Baron from Inkanyezi Events, managed to do. Without a hitch, I might add. And we were treated like royalty every step of the way.

Instead of staying at the Graham Hotel with the rest of the team, Afsana, Fiji and I were booked into the Evelyn Guest House, which is also owned by the hotel. My room was comfortable, spacious and – to my joy – had a garden where Fiji could run around and have necessary grass time.

Admittedly, I found the large open room difficult to navigate at first. Unsurprisingly, since it was an unfamiliar space. So I put my orientation skills training into practise and started to figure out the room layout.

Once I’d navigated my way round the room, I discovered the sound of the refrigerator was a great audio cue. I could always hear the fridge and knew where everything else was relative to it. And suddenly navigating the space became easy.

At the end of our second day in Makhanda, when Craig joined us, I was completely at home in the space. So, when Craig asked if we could turn off the fridge since it would keep him awake, I was so comfortable in the space that I could manage almost as well without it.

Going back to the guest house itself, it was cute to see how the staff took to Fiji. They were really great about making sure both she and I had everything we needed. And I appreciated how conscientious they were about keeping the outside gate shut so there was no danger of Fiji escaping to go and see some shows on her own.

Talking about Fiji, it was meant to be her turn to write an article for the blog today. But she was so warmly snuggled up in her new doggy bed that I didn’t want to disturb her. But don’t worry, I’m sure she’ll post an article soon.

On Independence – You’re Never Too Old to Learn

I’ll admit I was a tiny bit nervous when accepting Afsana’s offer to accompany me to Makhanda so I could perform in the Blind Date Show at the National Arts Festival.

I wasn’t nervous about Afsana accompanying me – I knew she’d be a great travelling companion and that I’d be in safe hands. Rather, it was the unfamiliarity of travelling with someone other than Craig that gave me pause. While I’ve known Afsana for several years, we’ve never really spent much time together and I wasn’t certain how well she understood the challenges of travelling with someone who’s not only blind but is also a Type 1 diabetic. Oh, not to mention her occasionally boisterous guide dog, Fiji!

Yet, what a great traveling companion Afsana turned out to be! We spent hours chatting – on the flight to Port Elizabeth, on the two-hour bus journey to Makhanda, and over several meals before meeting the others who were performing in the show. And Afsana connected with Fiji as well, even teaching her a new command (“Reverse, Fiji”).

Don’t get me wrong – I’m not saying that Craig deprives me of my independence. He doesn’t. But, when I’m with him I fall into the habit of letting him do most of the work when he’s guiding me. It’s just so much easier since I don’t have to concentrate as much on what’s happening around me.

Whereas, since Afsana left it to me to tell her when I might need guidance, I tended to work it out on my own.

What I need to figure out is whether or not I should break the habit of letting Craig do more of the work, or if it’s okay since I manage on my own the rest of the time. In reality, I guess the answer is somewhere between the two. Regardless, understanding how I manage my own independence has taught me that I’m never too old to gain insights into how I live my life. Which is valuable to me.

And, having the opportunity of getting to know Afsana better remains one of the highlights of a truly unforgettable time in Makhanda. I’m so glad I accepted her offer to come with me on the trip.

The photo was taken by Afsana and shows Fiji and me sitting at the back of the bus travelling between Port Elizabeth and Makhanda.
XXXXX 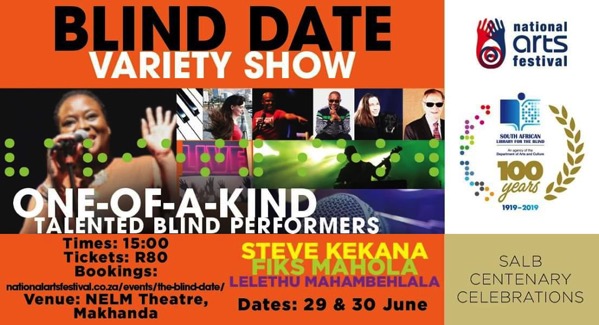 Guess where I’ll be this coming weekend – the National Arts Festival in Makhana, formerly Grahamstown. And I’ll be playing a gig while I’m there!

I’m one of the artists performing at the Blind Date Variety Show that’s part of the Fringe Festival – details are in the advert. You can book on the National Arts Festival website: www.nationalartsfestival.co.za

And Fiji will be there with me so no doubt both she and I will blog about our experiences in the coming weeks.

In the meantime, if you happen to be attending the National Arts Festival, it would be great to see you at our show…

Posted in Out and About with Fiji, The Blind Tourist | Tagged Blind Date, Fiji, Grahamstown, Makhana, music, National Arts festival
Email updates
Lois shares updates on her book, speaking and the reality of living with blindness. Find out what Lois is up to – subscribe here.
Search
Recent news
Facebook