Paris: How a Croissant is Made and Other Cuisine Secrets. 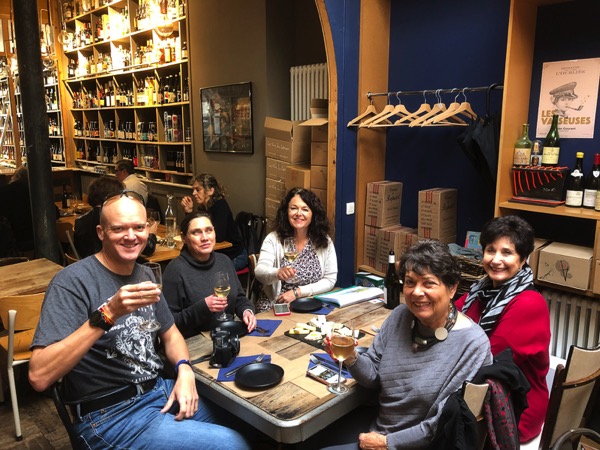 Paris has a reputation of having great food and wine. And what better way to sample both than on a local walking food tour?

When Craig and I were in Kolkata, India, we went on a fabulous street food walking tour, which we found through Airbnb Experiences. I wrote about my impressions of the tour in my article Kolkata: The Road less Traveled, published on 24 May 2019.

So it wasn’t surprising that we decided to find a similar food tour in Paris. And there are lots, believe me!

We finally decided on a food tour of Belleville, run by Paris a Dream. And it was a great decision!

Belleville was originally a small town on the outskirts of Paris – a little like Montmartre in ambiance. Both were integrated into Paris proper as the city expanded. The host of the tour, Isabelle, told us a little of the history of Belleville as we sipped coffee at our first stop…. Along with a delicious pastry.

From there we moved onto what I would have thought was the high point of the tour – getting to see how baguette and croissants are made at a local boulangerie. Isabelle told us about the different grades of flour used in France, and we watched in awe as one of the bakers worked with the dough that would eventually become tomorrow’s croissants. Yes, making croissants really should take two days. No wonder they taste so good in France…. Well, and because of the oodles of butter in the dough.

We also got to taste a baguette that had just come out of the boulangerie’s ovens. And I can honestly say I’ve never tasted a better baguette – direct from the oven is definitely the way to do it, if you have the chance!

Our next stop was a local delicatessen, where we sampled various handmade dips and spreads. And had a chance to shop, as well. At one point I was a little worried that we might have to pay for the whole bottle of preserved garlic since Craig was clearly enjoying sampling it so often. But no, it was all part of the tour.

After walking off our initial tastings, which were surprisingly filling, by wandering through the streets of this fascinating and little-known historic suburb, we arrived at what I took to be our final stop – a wine and cheesery.

Well, actually, it was a wine-shop that offered wine and cheese tastings, which is what our group had. We continued to chat and share travel stories as we sampled 5 delicious French cheeses along with a glass of crisp white wine. Those of you who know me will be amazed to hear that I even tasted a blue cheese… and enjoyed it, much to my own amazement!

By now I’d have been quite satisfied to sit back and relax after a morning of wonderful tastings of food and drink. But it seemed we still had more to learn about the area, as well as a final local delicacy to try – a vegetable and apple digestive juice that rounded out the morning perfectly. Both Craig and I thought we could taste either paprika or chilli in the juice, but we could be wrong. Though we doubt it.

From there we took a slow walk back to our starting point at the local Metro station, said our final goodbyes to the American ladies who had joined us on the tour, and to our charming and vivacious host, Isabelle, and returned to our apartment, ready for our next fun Paris adventure.

But you’ll have to wait till next time to hear about that.