Paws for Thought on the Couch 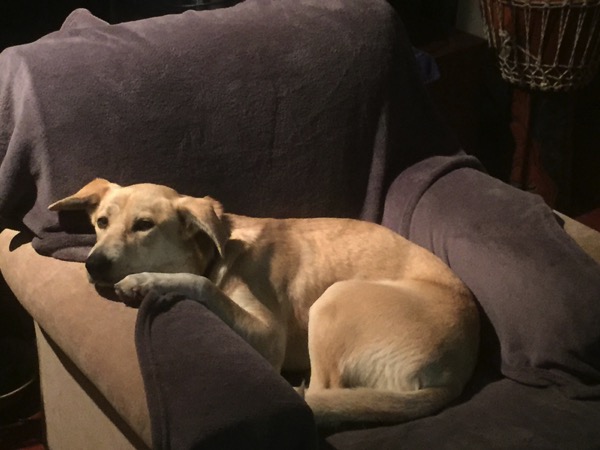 The very first day mom brought me home from guide dog training school I had a meeting with my new doggy siblings, Eccles, Emily and Calvin. They told me that mom and dad were already mostly well trained, with one exception – we weren’t allowed to sleep on the furniture.

I gave the matter some thought and decided it would be okay to just sleep on the warm and comfy blankets scattered around the house. Except for anytime mom went out and forgot to take me with her – of course I’d curl up on the couch then. But never when mom and dad were home.

Everything changed the day my doggy sister Allie came to live with us.

When she walked into the house Allie leapt up onto the couch and curled up. No matter what dad did, she’d somehow find her way there. When he eventually put planks of wood across the couch she simply tried pulling the cushions out so she could sleep on them. And landed up tearing the cushions to pieces.

After two weeks dad gave up… and the no-couch rule went out the window.

It took a little time for my doggy sister Emily and I to break the years of no-couch conditioning. Then we decided to try our luck. Because, ultimately, it would be horribly unfair if mom and dad yelled at us for doing something that Allie was allowed to.

Now, though we don’t do it often because we have beautifully comfy dog beds, Emily and I sometimes curl up on the couch as well.

Which only goes to prove that you can teach old humans new tricks!

Hmm, I wonder if we can train mom and dad to let us sleep on the bed as well. It might be worth a try…

The photo shows Allie asleep on the couch.

Posted in Paws for Thought | Tagged Allie, couch, Emily, fairness, Fiji, rules
Email updates
Lois shares updates on her book, speaking and the reality of living with blindness. Find out what Lois is up to – subscribe here.
Search
Recent news
Facebook