I Couldn’t Believe My Eyes… Umm, My Ears! 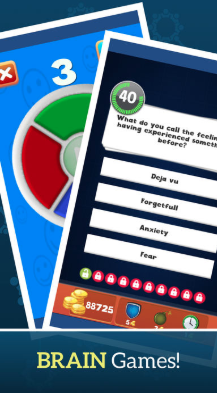 Isn’t life unbelievable? Mere weeks after I posted a lament that I couldn’t find an accessible word search, I found one, and a whole lot more great word and trivia games – all in one place!

It happened like this: a blind friend of mine posted on Facebook that she was looking for a word game she could play on her iPhone using Voice Over (the in-build screen reader app on IOS products). Of course I replied with a suggestion to try Seven Little Words, a word builder game I’ve been enjoying for some time. Someone else mentioned something called Huboodle and I couldn’t resist downloading the app to take a look….

Huboodle is a game pack designed by AppA11y Inc. , which currently includes 8 different games, though more could be added in the future. It’s a free app with some in-app purchases but these are in no way necessary for you to play any of the games. It’s available in several languages: English, French, German, Italian, Japanese, Malay, Simplified Chinese, and Spanish and is completely accessible using Voice Over. But don’t be misled into thinking the games are only for people who are visually impaired. There are many sighted people who also enjoy playing – the accessibility is just an added bonus.

Amongst those 8 games are two accessible word search games. I was so surprised when I saw that I almost fell off my chair. Then I almost jumped to my feet and danced with joy.

Strangely enough I’ve only played one word search so far. I’ve been enjoying some of the other games, Word Builder and Trivia Trail.

Word Builder is a game where you build as many words as you can from a selection of letters you’re given. Each level has different letter groups and a different target of words to find. You also gain extra points for finding words that aren’t on the list they give you, so it’s a great game for anyone with a fair vocabulary. I must admit I get particular pleasure every time I find those bonus words.

The other game I’m really enjoying is Trivia Trail. The goal is to work your way through 10 multichoice trivia questions within a limited amount of time. I’ve heard the time limit is 50 seconds but it feels a lot longer when I’m actually playing. The added trick is that you go back to the start of the level if you get a question wrong which takes extra time.

Sure, Huboodle also has some games of chance and I’ve dabbled with poker, blackjack and the wheel of fortune but none of them have really grabbed me. I guess I’m just not a gambler by nature. Other games I haven’t tried so far are a memory game, Simon Says, a multiplayer Ludo board game called Ludo Palooza and, of course, there are the two word search games which attracted me in the first place.

I’ve always loved word games. Back when I was still sighted one of the best things about working part-time at a local book shop was that I had first access to any new word search magazines that appeared on the shelves. Since losing my sight I’ve occasionally found myself thinking back to those word searches with nostalgia – heavens, on occasion , I’ve even caught myself wondering whether it might be possible for me to create an accessible word search of my own.

I’m sure you can imagine my delight when I found a podcast reviewing an accessible iPhone word puzzle called Clever Clues -so what if it wasn’t a word search, at least it was an accessible game involving words. Of course I downloaded it at once and started playing… 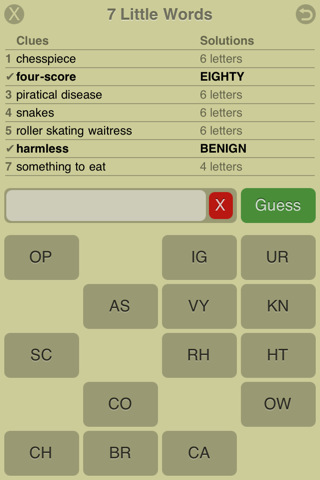 I happened to mention the game to a few friends who, to my absolute delight, introduced me to a second accessible IOS game, Seven Little Words – again, not a word search, but another word puzzle. So I downloaded it as well…

What it so great is that neither of these games have been specifically designed for the blind community. Their structure and the way they were designed and created makes it possible for both visually impaired and sighted word-puzzle lovers to play them with the same ease. So now I’m back to spending a little of my free time indulging that love of word games, playing both Clever Clues and Seven Little Words on a regular basis.

If you’re like me and enjoy games that get you thinking, stimulate your vocabulary, and provide hours of entertainment why not give these games a try?

If you decide to give them a go and can’t figure out how to play… drop me a line and I’ll be happy to offer a few suggestions, though I can’t promise you won’t have to decode my instructions first – after all, I do love word games!