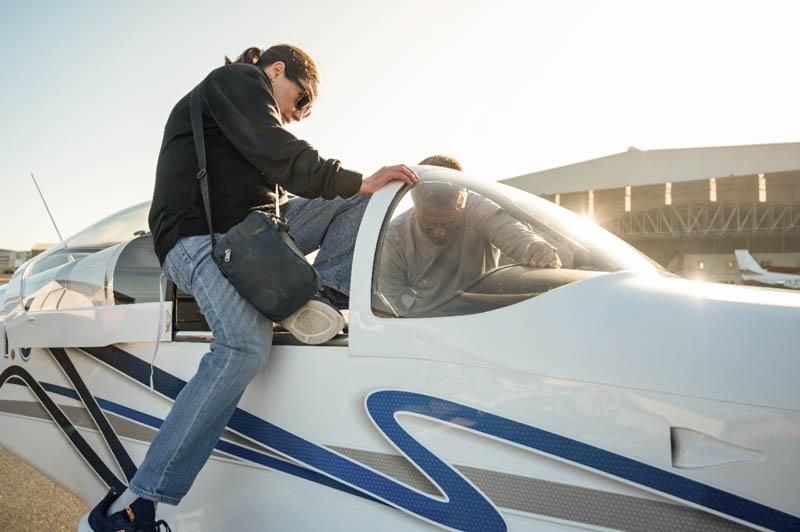 Last week Guide Dog Fiji told you how we found ourselves at a remote part of Cape Town International airport, and how I subsequently upset her by climbing into a small airplane and flying away. Of course, there’s more to the story, because lots happened between the time I flew away and when I returned to have a frantically relieved guide dog leap into my arms.

The whole story started a few weeks earlier. When we were asked if Fiji was interested in being in the photo shoot, I was invited to go for a spin in the plane afterwards. Which I naturally accepted – I mean, who wouldn’t?

A few days before the shoot, the photographer asked how I felt about experiencing aerial acrobatics, or aerobatics. Now, you might not know this, but I’m not really an adventurous person. So my instinctive response was “Absolutely no chance!” But then I asked myself whether I might regret not taking up a once-in-a-lifetime opportunity. And cautiously  replied that I’d decide on the day…

Which is how I found myself sitting in a two-seater airplane, feeling like my body was being squashed as I experienced double the earth’s normal gravitational pull (2G). Then I felt the plane turn to the left and suddenly my body became weightless – it was like I was being stretched. Which, of course, was because I was upside down as the plane rolled.

What struck me most was how smoothly the plane rolled. I didn’t actually feel like the plane was flipping over, possibly because I had no visual cues and could only judge from what I was sensing through my body.

We did a few more rolls, pausing at various stages of the spin so I could see how I experienced flying sideways, and upside down. At first I felt somewhat detached. I was focusing on what I was feeling, rather than living the experience. It was only after the pilot and I chatted about how the rolls had felt to me that I began to assimilate what I was sensing with what was happening. Which brought me back into the  reality of what was going on.

It was only in the final roll, where the pilot paused at each 90 degree position that my body and brain engaged totally. And, while it was breathtakingly amazing, the realisation that I had pushed my boundaries far enough for one day began to sneak up on me.

So, when the pilot asked if I’d like to experience a loop – going into a roll nose first rather than wing first – I shook my head and politely declined. Part of me regrets turning down the offer. Because I am curious what it would feel like for my body to be at  3.5G and how I would interpret a loop  without the sense of sight. But there’s also part of me that is relieved that I didn’t give it a try.

A friend of mine joked that I wouldn’t have been as thrilled had I been able to see the ground in the place where the sky should be. And I suspect she’s correct. Even thinking about the world being upside down visually  makes me a little anxious. But I didn’t feel that way at all when it happened, so it is probably because of my blindness.

Would I try aerobatics again? Absolutely yes! And I might even be brave enough to try a loop this time!

Oh, I forgot to mention that I also briefly flew the plane. I was amazed at how responsive the controls were – if I so much as touched the stick the plane would change direction or altitude. It was as exciting and nerve-wracking as the time I drove a car independently as a blind person, only magnified by about a million.

Posted in Disability Awareness, Out and About with Fiji | Tagged aerobatics, airplane, Fiji, flights, guide dogs
Email updates
Lois shares updates on her book, speaking and the reality of living with blindness. Find out what Lois is up to – subscribe here.
Search
Recent news
Facebook