The Espresso Show – My First Ever TV Appearance!

Having the opportunity to appear on television as a Casual Day Goodwill Ambassador was a chance not to be missed – yes, it meant waking up at the crack of dawn to be at the studio by 06h00 in the morning, but its seriously not every day that you are given a chance to appear live on TV, is it?

I found the whole experience quite surreal. There is a lot of sitting around and waiting while things happen around you, and then several flurries of activity to get everyone ready to go on air (umm, or should it be screen for TV?) – sitting around feeling spare while people rush backwards and forwards around you, only to be hurried into make-up at some unknown sign (and my word, are those make-up ladies professional!). Then more waiting around, this time “in the wings” between the sets as other segments of the show are shot. Next comes the flurry of activity as everyone is mic-ed up correctly and the engineers check that the microphones are working, and there is a (super quick) run through of what the presenter is going to ask each person. The anticipation builds as the segment just before yours goes ahead on the other set. Then suddenly you are being hustled towards the set, told where to sit and everyone holds their breath as the final countdown begins.

And, just as suddenly it is all over – a 5 minute segment on what Casual Day is all about with each of us 3 Ambassadors being asked a single question… though I’m still not sure what I would have done if they had actually asked me the question meant for Simone of what it meant to me to be a role model as a hearing impaired ballet dancer!

I left the set with the strange awareness of how unreal the TV world must b – when you are on set and on camera everything appears and sounds so calm and relaxed… but behind the scenes you are very aware that there is organised chaos as the various role-players shuffle guests from one place to another so everything appears slick and professional to the viewers at home. The crazy thing is that it works, as was clear when I watched the recording of the segment that Jabulile, Simone and I took part in.

All things considered I found it a singularly strange experience.

But, would I do it all again if offered the opportunity? Hell yes! I haven’t had that much fun in ages!

If you want to watch the video, here it is…

Yay! My Cape Pulpit interview was aired at 16:40 today – take a listen.

The last month has been a whirlwind of activity, from my initial suspicion when I received the e-mail congratulating me on being awarded a Tributes Excellence award for 2015, culminating in the awards banquet two nights ago.

You must understand the reasons for my initial suspicion – the mail I received was through my website, was related to an award that I had never heard of, was from someone whose name I didn’t recognise, and a few speaking friends had recently received fairly similar scams. So I was somewhat suspicious, as most people would have been. However, after some investigation, not only did the whole thing turn out to be legitimate, but it also turned out that the award put me back into contact with someone I had known when I was studying at the university of KwaZulu Natal, back in the days before I lost my sight.

To explain the whole thing would take far more than just a single post, but perhaps a little background might be of help: the Tributes excellence Awards are awards that are bestowed annually to women with disabilities who are recognised as having excelled in their fields. The list of previous recipients numbers some truly incredible women – to find out the calibre of women who have been recognised, you can take a look at the Tributes website: www.tributessa.co.za

And so, we, the 2015 Tributes Excellence recipients, and our traveling companions, spent a few days in Mangaung (or Bloemfontein, for those of you who know it by that name), being treated to a number of events, experiences and celebrations, courtesy of the Mangaung Municipality. I found the cultural tour of Mangaung of particular interest with my background and love of history, and was moved by our visit to Amelia House, a home for children with severe Cerebral Palsy.

The Tributes Award Ceremony was quite an event, with several government dignitaries from local and national government in attendance, and an audience of around 400 people.

But for me the most lasting impression of the Tributes Excellence 2015 experience will remain the relationships I built with the 12 amazing women who were honoured as this year’s Tributes Excellence award recipients. I was impressed, humbled, motivated, amazed and inspired by the passion and dedication shown by each of the women who were recognised, each of whom is playing a role in making Southern Africa a better place for those who are differently-abled.

My second Casual Day interview was with Radio Cape Pulpit 729 AM today.. Only this time it was a pre-recorded interview and, right now, I’m not sure when it is going to be aired, though definitely before Casual Day on 4 September.

This time I was not alone, as my amazing fellow Cape Town Casual Day Ambassador, Simone Botha, who is a hearing impaired professional ballerina, was also interviewed.
Here’s something you may not know: a person who is hearing impaired and uses a cochlea implant to assist them in hearing, generally will do an in-studio interview as a telephone interview poses challenges.

The previous interview I did focussed on Casual Day, the positive change that the Casual Day event has on changing lives of persons living with a disability, and on where people could get their Casual Day stickers. This time, it felt to me like the focus was on me- and what it was like living without sight… and that made me a whole lot more nervous – I’m not sure if that was a hangover from my previous reticence to tell my own story, or whether I was merely startled as I had assumed the focus would be on Casual Day, but that’s how I felt!

Still, I found myself enjoying the experience of this interview, and especially of sharing the experience with Simone – though we were interviewed separately, Simone sat in on my interview and we took advantage of the opportunity to get some photos.

I’m loving the time I’m spending as a Casual Day Goodwill Ambassador, and doing my small bit to make a difference!

We couldn’t have planned it better if we’d tried – the day I was featured in the People’s Post newspaper, in the Southern Suburbs of Cape Town, was also the day I was scheduled to do my first Casual Day media interview, on Radio CCFM 107.5, in Muizenberg.

Thanks to Andrea Vinassa, our PR Champ at the Casual Day office, I was well briefed on what types of questions I might be asked, and she gave me all the salient facts that I would need to sound like a great ambassador during the interview.

Fortunately I had the chance to chat to the interviewer for a few minutes before we went on air so I had a good idea of what to expect… although, knowing what to expect and being efficiently prepped only helps with part of the nerves!

But, as I always say, it is those nerves that keep me focussing on what I’m doing and saying… it’s only when I’m not nervous that I mess up!

In general, I felt the interview went well – thanks in no small part to the preparation given to me by Andrea, and to the experience of unprepared speaking that I have gained as a member of Toastmasters International –I am living proof of the fact that Toastmasters works!

If you’d like to listen to the interview, you can do so below.

It Never Rains, But It Pours…

Have you ever been in a phase when it suddenly feels like lots of things start happening at the same time?

There I was, busy with my brand new writing project today when I noticed I had received an e-mail… from the PRO of Casual Day inviting me to be one of their Goodwill Ambassadors for 2015. I’m really excited about this opportunity as I believe it will enable me to use my blindness to make a real difference in the lives of others living with a disability.

The role of a Casual Day Goodwill Ambassador is to raise awareness of the positive impact that Casual Day makes on the lives of persons living with a disability, and to increase Casual Day sticker sales, thus making a real contribution. The role often includes radio and TV interviews promoting Casual Day… so who knows where it will take me… 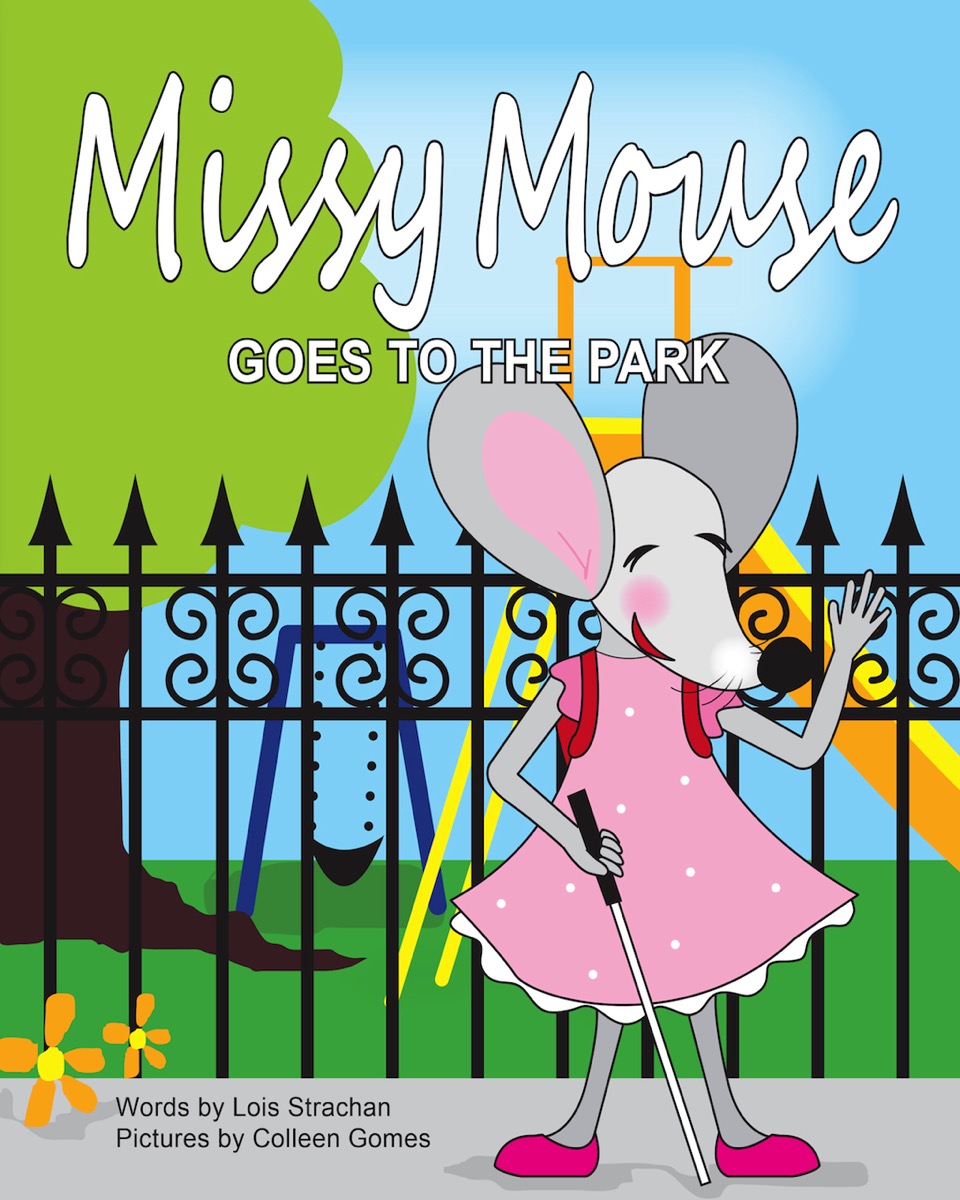 Lois shares updates on her book, speaking and the reality of living with blindness. Find out what Lois is up to – subscribe here.