Skip to Content
Home Beyond Sight Blog The Blind Tourist Europe 2022: A Moment of Zen at Krakow Airport 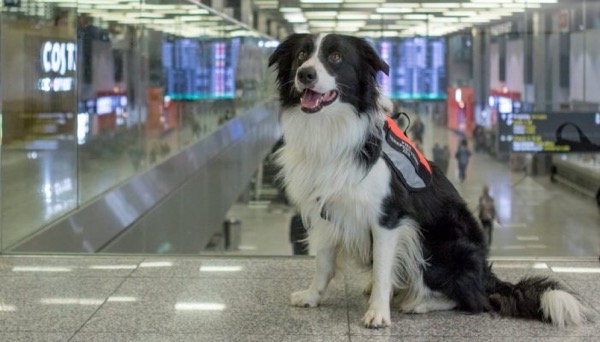 I was sitting at the gate, waiting to board my flight from Krakow to Vienna, when a cold, wet nose gently insinuated itself into my hand. To say I was startled would be something of an understatement.

I pressed the stop button on my book reader, reached out my hand… and patted the gorgeous collie who had just rested his muzzle on my hand.

His handler told me his name was Zen and that he was a therapy dog whose job it was to walk around the departures hall and sense passengers who were nervous about flying. Zen would wander over to them and offer love as a way of calming their anxiety.

I didn’t have the heart to tell the handler that I wasn’t at all nervous about my upcoming flight. Because then she would have taken Zen to go and find someone else to play with. And, since I was missing my guide dog and her siblings, I was only too happy to have the chance to pat Zen.

Having done some research on the topic of therapy dogs being used in this way, I discovered that an increasing number of airports have started therapy dog programmes. In 2018, there were 58 such programmes, and it appears that Krakow Airport is amongst the number that now offers such a programme. They are proving to be really good at helping stressed passengers ease their nervousness. As anyone who owns a dog could tell you.

It was wonderful to meet Zen and to have the chance to talk with him and his handler to understand how they work. And I’m sure I’m not the only passenger who was delighted to experience a moment of Zen that day!

Interestingly, Craig had seen Zen earlier while exploring the terminal. He told me that he had seen a dog wearing a harness but had no idea what type of working dog he was, because his handler didn’t appear to be blind, nor to have a mobility condition. So, to have Zen wander over to introduce himself shortly afterwards was wonderful.

Have you experienced a therapy dog in an airport during your travels? If so, where did you meet them? I’d love to know…
XXXXXX