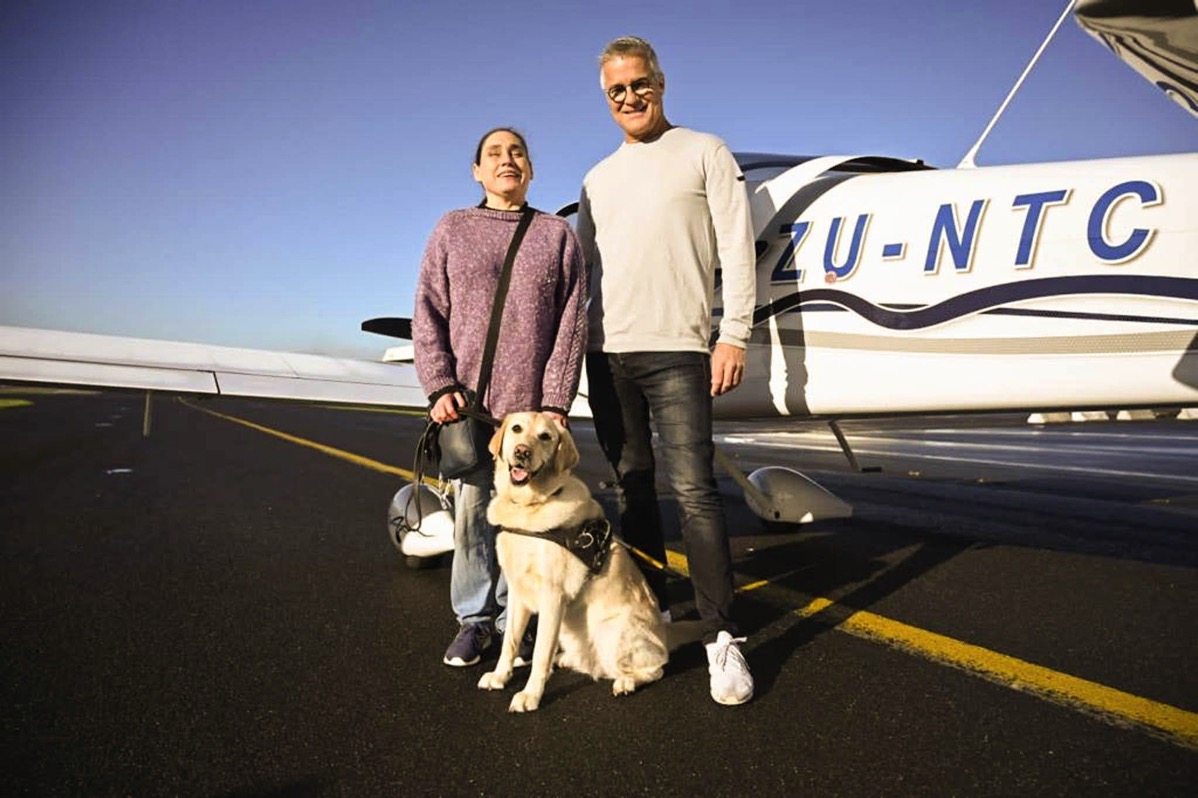 Hello everyone, it’s me – Fiji.

I’ve told you before that I sometimes think humans do strange things. I found myself thinking that again recently when me, Mom and my friends from the South African Guide-Dogs Association for the Blind went on an adventure together.

Don’t get me wrong – I’m not saying it was strange that we went on an adventure together. After all, that happens fairly often. But the actual adventure was peculiar. At least to me it was.

You see, we went to a quiet part of Cape Town International airport and walked up to a little airplane. Then Aunty Cheryl and Aunty Tania made me stand and sit on the wet ground while they took photographs. Aunty Cheryl gave me treats every now and then, especially when I looked at the camera and gave my bestest doggy smile.

What was strange was that I had to sit beside the little plane on my own, while Mom just stood behind Aunty Tania and her camera. It was strange because my job is to be with Mom and guide her. And because I take my job as a guide dog seriously, I felt I ought to run to Mom every few minutes to check that she was still okay. Then I would run back and sit down on the wet ground again so Aunty Tania could take more photographs.

At least I understood why Aunty Cheryl had insisted on giving me a thorough brushing at the training centre. I don’t really enjoy being brushed so I tried to hide behind my mom, but Aunty Cheryl didn’t give me a choice. And at least I knew I was looking my beautifulest for the photographs.

Then the morning  got even weirder – Mom climbed into the little plane and flew away. Without me. Without even asking me if I wanted to go with her, which of course I did. At least Aunty Cheryl and Aunty Tania also got left behind, so I wasn’t on my own. But still, Mom flew away, which was extremely naughty of her.

Eventually the plane brought Mom back and I ran up to her and jumped up and down while remonstrating with her. Mom simply laughed and patted me. Which was nice, but didn’t actually answer any of the questions I had about where she had gone and why she hadn’t taken me with her.

So, like I said, it was all very weird.

Afterwards Mom explained that the photographs were going to be used in the 2023 calendar that the South African Guide-Dogs Association  for the Blind brings out each year. Which means there will be a photo of me hanging on people’s walls for a whole month next year! Along with lots of other photographs of beautiful guide dogs and guide dogs in training. I promise I’ll let you know when the calendar comes out so you can also have a picture of me hanging on your wall.

Mom asked me to tell you that she’ll let you know all about her flight in the little airplane next time. Because she’s still wagging about  it. Well, she would be wagging if she had a tail. So, watch out for her next article.