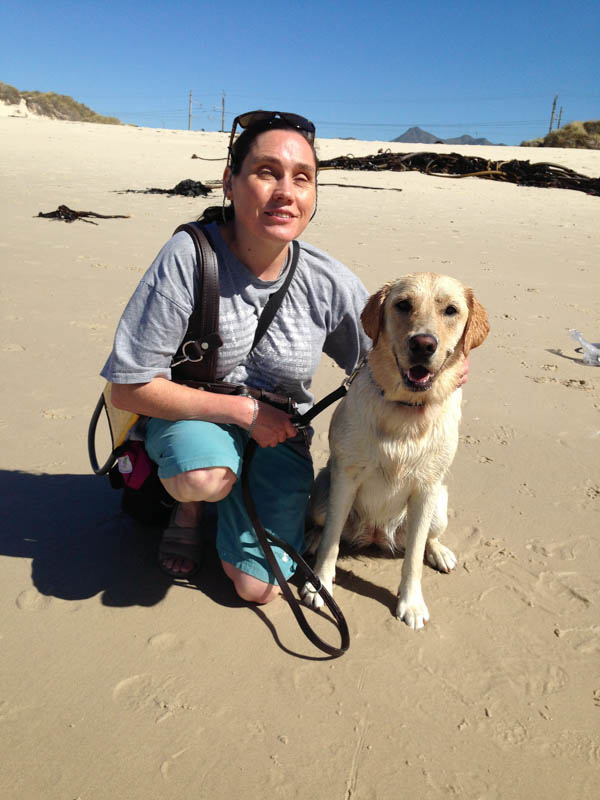 I think train travel must be important, because I hear lots of trains whistling and screaming past my house from early morning to late at night.

Clearly lots of people travel on trains. Which means that some guide dogs must also go on them with their humans. But I don’t think I’d like to take Mom on a train unless I had no other choice.

I see trains often when Mom and I are walking on the road that is next to the trainline. To me, trains look like giant snake monsters that want to gobble me up. And they make a dreadful rumbling and moaning sound. They shake and shudder as they go from one place to another and their wheels scream and shriek as they go by. And their horrible unearthly whistles try to shatter my poor eardrums. Sometimes their doors whoosh open and sometimes they don’t, which is also intimidating. Is it any wonder trains make me a little nervous?

Admittedly I’ve only travelled by train once, back when I first met Mom and had to help teach her how to work with me. All of us guide dogs took our new humans to the train station and caught a train to Fish Hoek beach. While I loved having the chance to run, wrestle and play with my guide dog friends on the beach, while the trainers made sure our humans didn’t misbehave, I honestly would have preferred to travel there by car.

I know my guide dog sister-aunts Leila and Eccles used to take Mom to work on the train before I was her guide dog, so I know it must be possible for us to go on a train and not get gobbled up by the nasty snake monster-type thing. I’m sure I would probably also get used to it if I had no other choice. But I honestly think it would be far better to go by car or by Uber. Or simply to walk there, provided it’s not too far. But since Mom now works from home, it’s all hypothetical anyway.

So, while I know trains are good and are important to help humans and some guide dogs get to where they need to go, I’m just as happy that I don’t have to use them. Unless it’s the only way to travel to the beach. In which case I might be willing to consider taking Mom on a train again.