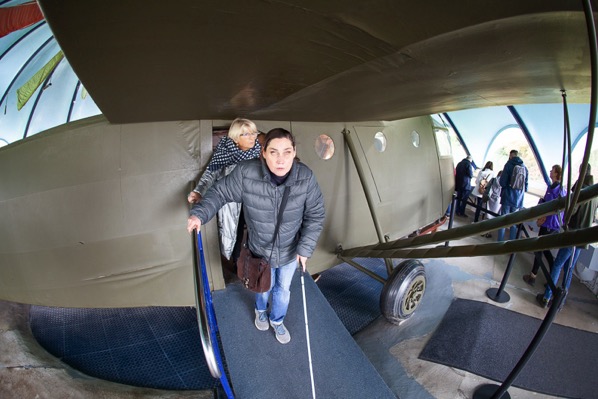 I’ve never enjoyed going to museums. Actually, I should rather say that I’ve never been a fan of old-style museums. You know, the type that hides the exhibits away behind glass. And I think you‘ll understand when you consider what that might be like for a visually impaired person for whom sight isn’t an option.

Far more fun for me are museums that try to draw visitors in with interactive and multi-sensory experiences. Amongst my favourites are museums I visited in Poland – the Schindler Museum in Krakow and the Warsaw Uprising Museum in Warsaw.

What does this have to do with my recent trip to Normandy in France?

I knew we would be visiting some WWII museums while we were in Normandy. I just wasn’t sure what type of museums they’d be. Sadly, I found that most of them weren’t of much interactive interest to me. Until we visited the Normandy Airborne Museum.

Admittedly, I wasn’t able to access many of the exhibits in the Airborne Museum. But those that I was able to engage with using my other senses more than made up for the rest.

The first was a replica of the gliders that carried Allied forces into Normandy to capture control of strategic roads and bridges to help gain a foothold in Normandy. I was able to walk around the outside of the full-scale glider and explore it using the sense of touch. I was also able to climb aboard the glider and feel what it must have been like for the soldiers as the gliders were towed across from England and then set free to glide down into Normandy.

But the real treat awaited me on the upper floor of the museum – a simulation of a troop plane that carried the paratroopers who formed the first wave of the attack. As we stepped into the shell of the large plane we could feel the thrum of the engines beneath our feet, hear the thunderous roar of the engines and the crackle of radio messages from the cockpit. It was eerily authentic to walked through the plane, as the paratroopers would have done so many years ago.

Leaving the plane, you stepped out into a visual representation of what the paratroopers might have seen – the vague shapes of a string of parachutes opening below you, the dim view of the ground far below, with farmhouses, towns, church steeples, fields and woods. Although I wasn’t able to experience this part of the exhibit, my sighted husband said it had a powerful impact on him.

The next part of the simulation was based on what the paratroopers may have experienced on the ground – the chaos, destruction and, above all, the constant stutter of machine guns and explosions. It was an over-stimulation of the senses that left me feeling anxious, unsettled and drained.

Of all the experiences I had in Normandy, this was the one that gave me the clearest idea of the reality of what happened on D Day – 6 June 1944. And the experience was sobering, to say the least. After the simulations, I cannot even begin to comprehend what the reality must have been like.