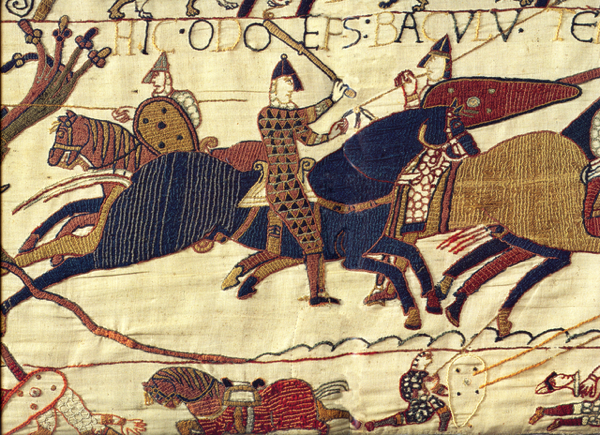 Having said that my primary interest in going to Normandy was to discover a little of the history of the area at the time of William the Conqueror, who successfully invaded England in 1066, the Bayeux Tapestry seemed a good place for me to start.

The Tapestry is a 70-metre-long embroidery depicting the story of what led up to the Battle of Hastings in 1066, where the Norman army defeated the English army under the leadership of King Harold. It has 70 panels telling the story, although some of the details are ambiguous, even with a certain number of captions being included in the embroidery.

The basic story seems to show King Edward sending his duke, Harold to meet with William in Normandy. William and Harold collaborate together to fight a battle in Normandy and Harold is then shown swearing an oath to William, though we aren’t told what oath it was. Harold subsequently returns to England where he is crowned king following the death of Edward. William and his forces invade England upon hearing of the coronation and the Battle of Hastings is depicted. It’s thought that panels showing the coronation of William would have closed the story told by the tapestry, but these were lost.

The ambiguity arises from whether or not Edward intended for William or Harold to succeed him to the throne of England, and what oath Harold is seen to swear to William. In short, whether or not William’s invasion of England is a legitimate move to reclaim the crown that was promised him, making Harold a traitor. We can’t say for sure from what is shown in the tapestry, and history appears no clearer. I suspect the answer would have been considered to be obvious to all who saw the tapestry at the time but, sadly, we simply don’t know.

I want you to pause and consider that for a moment – the tapestry was created more than 950 years ago. It blows my mind when I think of how remarkable it is that it still exists, let alone that it’s almost entirely intact and undamaged.

To tell you a few of the exciting experiences the tapestry has survived, during the French Revolution it was ordered to be used as a covering for military wagons, and was only rescued from that fate by a local lawyer who hid it until the danger passed. Both Napoleon and Hitler seized control of the tapestry to use it for propaganda purposes, but it never left France and always eventually came home to Bayeux.

This year, the tapestry is scheduled to be lent to England, the first time in 950 years that it’s left France.

The tapestry is now kept in a sealed display case. Visitors walk the length of the case while listening to a detailed description of what they’re seeing in each frame. I would have loved to have been able to touch the tapestry and feel the ancient embroidery but know that wouldn’t have been possible – after all, considering all the tapestry has been through in it’s very long history, it would be crazy to expose it to any potential damage now.

I left the museum with a fair idea of what the tapestry looked like. I was also able to engage with other items in the museum, and run my fingers across modern embroideries showing a few extracts of the tapestry. Which was almost as good as touching the real thing.

It’s sad that most visitors who come to the museum view the tapestry and then leave without exploring the museum’s other exhibits. There’s far more to see – weapons and armour similar to those depicted in the tapestry, as well as other historic items from Normand times that are definitely worth a visit.

A final note on the museum where the tapestry is displayed. I was impressed that it is listed as being wheelchair accessible. There is a step-free entrance that avoids the flight of stairs up to the museum entrance, and the museum itself is step-free with elevators allowing access to all areas of the museum. –

All round, it was a thoroughly satisfying visit that allowed me to learn about a period of French and English history that I’ve never really studied. Well worth a visit!