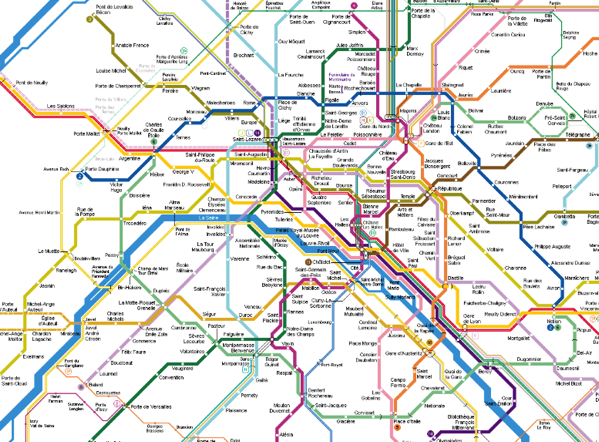 Spending more than a week in Paris, travelling round extensively on the Metro and train service, I got the feeling that a traveller using a wheelchair might encounter some problems using the Metro. Luckily, I was travelling with my sighted husband, so didn’t have to find my way around unfamiliar Metro stations on my own, especially as not all trains had audio announcements to let me know which station we were approaching.

Physical access is seldom a problem for a traveller with a visual impairment, but I was very aware there appeared to be few elevators, that many of the trains had steps up from the station platform into the carriage and that there was often a gap between the platform and the carriage. The only Metro line that seemed to have a good level of wheelchair accessibility was the 14th, which is a newer line – it even has a barrier to stop people falling onto the tracks, either by accident or design.

When I got back to Cape Town I wanted to discover if my observations were true. And, if they were, I wanted to learn how those using wheelchairs are able to navigate their way around Paris. So, as almost anyone would do, I turned to Google.

In my exploration, I found this fantastic article on the accessibility of Paris, and not just the rail services. I think it’s a great article for someone with a disability to read before heading off to Paris for a visit.

I know most of the Metro and rail infrastructure in Paris was built before the needs of persons with disabilities were really considered, but I was startled to find that so little accommodation has yet been done.

Still, it’s good to know that persons with disabilities who do visit Paris are able to get out and see this beautiful and historic city.