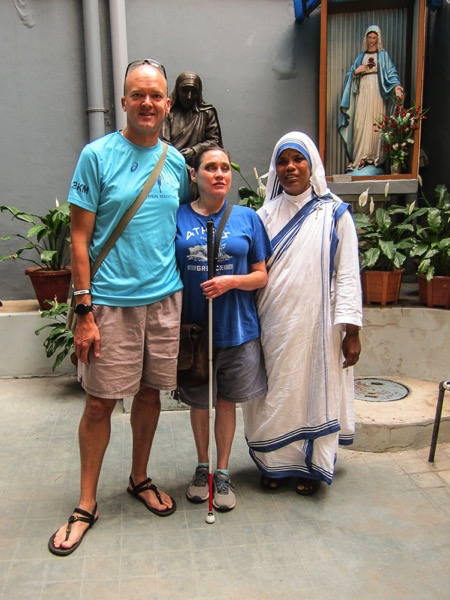 From the title of this post you might suspect I’ve switched genres and started writing bad science fiction. I promise that isn’t the case.

The Mother House is the name given by locals to refer to Mother Theresa’s home in Kolkata, India. And that was the first site we visited on a day out in the vast and busy city.

When you enter the Mother House you’re enfolded in a marked sense of peace and tranquility. Considering the bustling nature of Kolkata – with bustling being quite a euphemism, believe me – the quiet is decidedly startling. I almost felt like breaking that quiet with a sudden noise or movement would earn me a reproving frown from some unknown person. Which isn’t to say the site is forbidding or unwelcoming. It’s not. Far from it. But it feels enclosed in a wonderful sense of calm.

The Mother House is neither large nor grand. Yet it contains an interesting range of rooms – a small chapel, the tomb of Mother Theresa, a tiny museum containing a few artefacts from Mother Theresa’s life and work, including an ancient wheelchair that she used for several years towards the end of her life before she passed away, after which it was given to another person in need.

Then, up a flight of stone stairs is Mother Theresa’s room, behind a locked gate so you can see the room in which she worked for many years, without disturbing anything. The room is small and simply furnished, yet is filled with filing cabinets and paperwork from the hundreds of correspondents and causes supported by Mother Theresa and her order.

At no time were we asked for financial donations. Certainly, if you wish to make a contribution to assist their work, it will be gratefully received, but there’s no overt requests anywhere in the Mother House.

When We’d spent a little time taking in the tranquility of the site, we started to walk towards the exit. We were approached by one of the nun’s, who wanted to know where we were from and asked us a little about ourselves. She is pictured with us in the image above. I can’t say whether this was usual, whether it was because we were overseas visitors, or due to my blindness, but it was interesting to have the opportunity to take a moment to talk to the nuns.

It was only much later that I found myself wondering how Mother Theresa had navigated that flight of stone stairs in her later years. I guess I could have asked one of the nuns, but sadly the question only occurred to me much later. Hopefully I’ll have the opportunity to go back to The Mother House and ask my question sometime in the future.