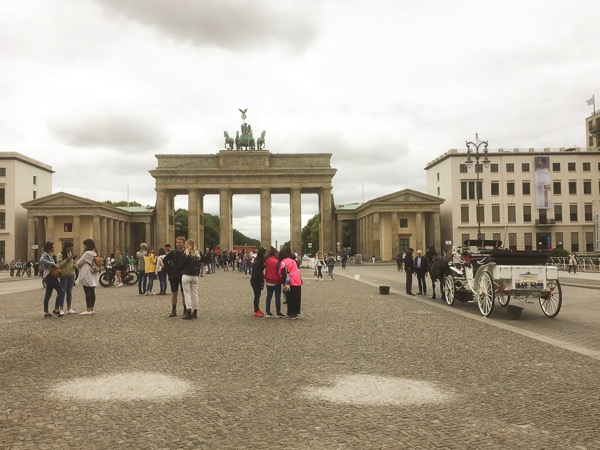 A little while back I read “The City & the City” by China Mieville. It’s a story about a city that, for some inexplicable (or in my case forgotten) reason has been divided into two totally separate cities. As a citizen of one city you are not permitted to acknowledge the existence of the other city and its inhabitants even though you may share the same roads and the same neighbourhoods.

At the time I read the book we were planning our trip to Europe including a few days in Berlin. I found myself wondering whether living in Berlin before the Berlin Wall fell in 1990 was anything like what was portrayed in Mieville’s novel.

Even though Berlin is a united city once more and has done much to reinvent itself since 1990, the strange circumstances in which the city found itself for 45 years has had an unusual impact on the geography of the city.

Usually when we tour a city we find one or two central areas where most of the historic buildings are situated – but not in Berlin. As we navigated round the city Craig commented that many of the sites seemed far away from each other, and that he had underestimated the amount of time it would take to travel around.

Here’s what I think. From 1945 – 1990 Berlin was split into two geographically similar cities. Each city had to develop separately, with systems and services being needed by both. So much was duplicated – within the boundaries in West Berlin, and, often on the outskirts, of East Berlin. So, while many historic buildings are near the Brandenburg Gate, which lies on what was the boundary between East and West Berlin, many are not. And I think that’s the reason it takes so long to travel the city.

You may laugh, but I had a second realization when I was in Berlin. I’d always envisioned the Berlin Wall as being there to keep East Germans “in”. In reality, since Berlin was surrounded by East German territory, the Berlin Wall was built to enclose West Berlin. I guess I equated West Germany with freedom and East Germany with confinement and that dictated my mental image of the city. Still, it was quite a revelation to me when I realized how my reality had been shaped by the words I used.

And so, back to where we started – China Mievilles novel “The City & the City”. I have no idea if living in a divided Berlin in any way resembled the novel, but the book certainly sprang to mind many times during our time in the city & the city that are now united once more.